In pursuance of those messy/wild/transfigured things…

Camp 2, 11,200 ft. Today we dropped a cache at 13,400. I carried around 40-pounds and pulled another 45 on the sled. I’m writing this now after dinner and boiling snow while the boys trade off for the next few hours until our Nalgenes fill. Our water always contains random hair and food from prior meals. I’m pretty tired, haven’t slept more than 3 hours each night, and we’ve been here for 4, so far. I’m listening to “Precious Little” by a band named Hiatus. It’s a piano song and the air is frigid, as humidity turns to ice on the tent walls.

Tomorrow we send to Genet Basin around 14,000 ft. Along the way, we’ll grab our cache. From there we hope to set up comfortably for the following 3 nights, taking advantage of bad weather to acclimate again, the upside to being stuck in a tent. There’s been a mix up with the gas, so we’ve misplaced a gallon as a team. Could have been any of us, but it’s not important because we calculate that we still have plenty to get us to the summit at least.

As we hiked down today, after a successful and motivated lead from James, I wondered about myself and the people who choose this path in life. Is there a loneliness in us? The ones who roam the mountains…but as I sit back in our tent in good company I realize quite the opposite. I find my appreciation enhanced for the people, places, and the things we search for – the search that never keeps us alone. I am never alone on the mountain. I feel I get a certain solidifying bond after a long expedition. I find there’s a rare offering in life, and that’s one of deep admiration. I carry that with me now, wherever I go. From a city street or mountain top, tethered in good faith for my friends to send well, hard, safe, and mindfully. 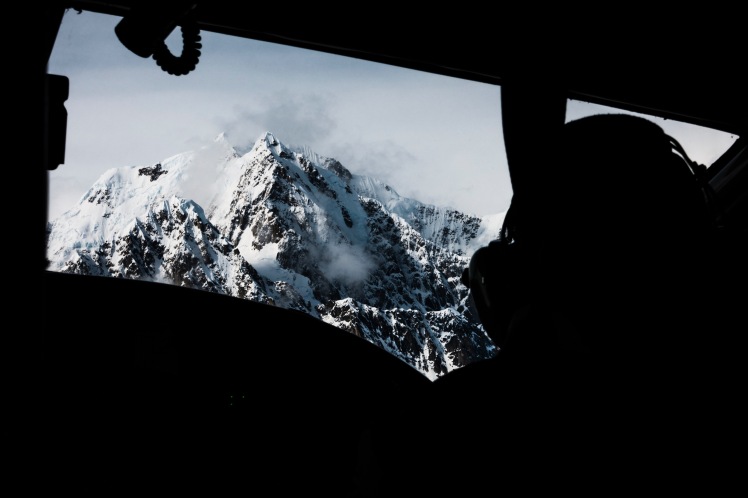 Alaska. Pilots in these parts are some of the best in the world. Lots of cool history through the years ingrained into the sky.

Upon arrival, we moved straight towards Camp 1. Some people opt to wait for the ice to harden and move during “night” hours to lessen the chances of taking crevasse falls (still light-ish out this time of year). We decided to take our chances, as we all were educated in the how-to’s in case we got in a bind…like a crevasse. Plus we had a narrow window of good weather. We needed to move quickly to make it up to Genet Basin before the storm. On this mountain I honestly believe you need to be an opportunist when it comes to weather and making moves.

There was a mild storm through the haze of the slow, surrounding cloud covering the glacier as we navigated around crevasses, finding the safest way possible. Prior heavy traffic breaking trail made it easy. Approaching Camp 1, we took a more obscure route to avoid the annoying path someone had taken down the glacier which resulted in a seemingly unnecessary lug up a hill. We ended up having to jump over a 3-foot wide, deep crevasse showing signs of a struggle. An ice screw was found, lying silent amidst the vacant scene.

Approaching camp we found the party of 2, of which one was the victim who had taken the fall and managed to chimney out. I returned the ice screw back to them. It’s best to do good deeds on the mountain because mountain karma goes a long way.

Earth is still the best at mood lighting.

I’m happy to have seen the summit again for the second year in a row on Denali. More than happy to have gotten to see it with James, Allen, Jeremy, for their first time. Mountains are awesome, as we know – won’t sit here and soapbox about why. But there’s another aspect to why we search in them and challenge ourselves. I heard a quote from psychologist William James the other day that made me think about why we put ourselves through a lot to only sometimes find a summit. Summits are cool, but the process certainly can feel much more rewarding after the immediate stoke has dissipated.

James said, “The primary challenge facing modern man is finding a moral alternative to war.” For me, that’s the spiritual benefit we find when we challenge ourselves in unconventional ways. I’d prefer to find it this way, up on Denali, rather than arguing over a parking spot at Whole Foods, being passive aggressive in a work space, or something like that. At least that feels like the goal. I took a photo during our long stroll from 17,200 ft, down towards base camp on the Kahiltna glacier. This was at the ridgeline below windy corner, just before walking into the quiet clouds, down motorcycle hill and through a sleeping Camp 2. This is my absolute favorite spot on the mountain. Last year my expedition went down around the same time of night. I wanted to make sure it happened once again so the amigos could witness the best lighting for grand views. A great exit to remember. Yet frostbite was a real bummer this year around the mountain. 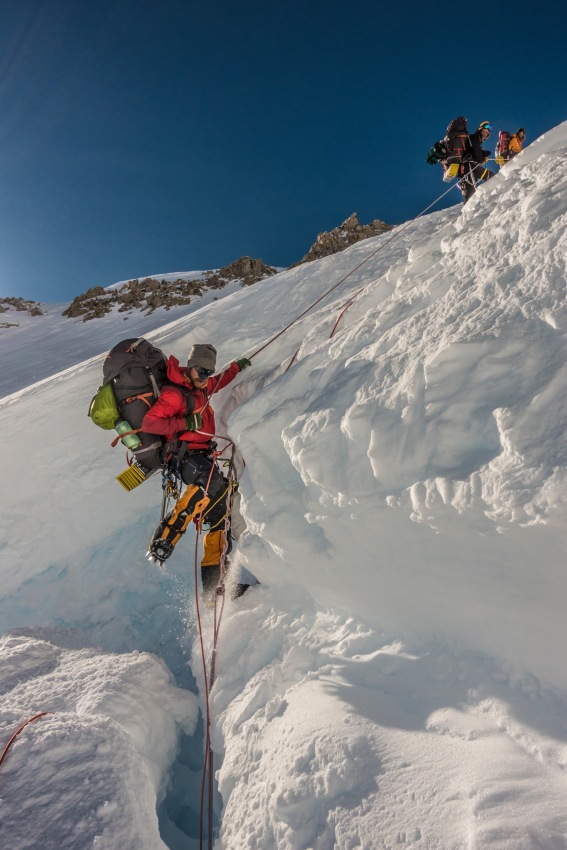 I’ve never experienced such a thing and I actually got a little nervous about losing a digit. I considered giving the boys the simple beta to get to the summit over having them turn around, which was humiliating but that’s what mountains teach and I am thankful now for that. James let me borrow his toasty mitts with hand warmers. He put mine on and said, “Dang, your mitts are ice cold!” I think it’s time for new ones after this trip. In fact, I gave mine to someone when I got off the mountain ensuring they were good fire starters.

Nature is honest. There’s no false or odd existential idea puttied onto this simple equation. I find nature as a way to keep a routine that is not vacant from the daily practice of awareness and remaining humble while free.

Yet it’s super frustrating feeling strong, peaking in your game, and more than able…and you’re shut down by something outside of yourself, something we can’t control. We clearly aren’t made to live on top of a mountain like Denali so in actuality it makes total sense. The nuances in defeat though, that mindset can have a limiting nature. In fact it should continue to make more and more sense because if it didn’t then I wouldn’t be getting better/learning much at all. Or getting more creative in my pursuits. It’s just as good to get served some humble pie, even after standing tall on the summit. And, well, that pie is still digesting. Nonetheless, I’ll still go back for the 3rd time next year, on some different route options, chasing light and sound and storm. 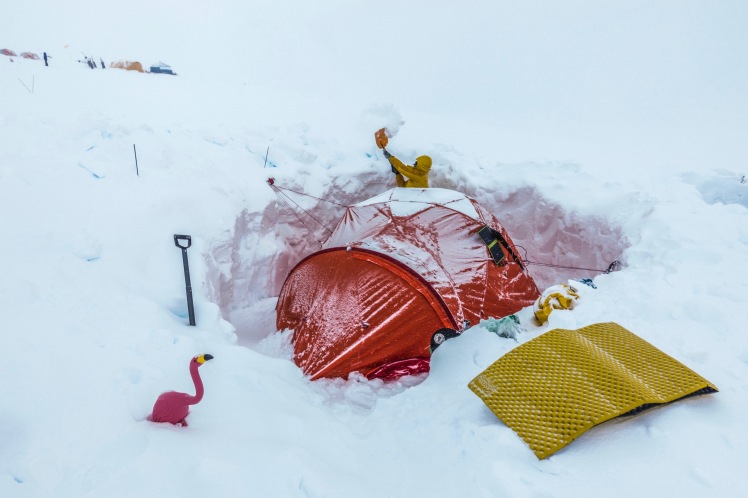 What is your alternative to war?

“The world is like a birthday cake, so take a piece, but not too much.” – George Harrison

What does that quote mean to you?

Sterling Taylor is an American-based photographer who enjoys pushing the standards of adventure. He is currently working on environmental conservation efforts in the U.S., climbs mountains throughout the Himalayas and Alaska, and is working on a book project entitled, “Motorcycle Dirtbag,” which combines a drifter’s lifestyle on 2 wheels, rogue camping, grit, rock climbing & mountaineering. Sterling grew up on a plot of land outside of Fort Worth, Texas with his father Stormy Taylor (former Marlboro man) and Mother Anita (avid horse rider). Competitive gym climbing during his childhood and being outdoors inspired his appreciation for mixing sports with pushing the greater unknown. Part of his craft today is combining his photos with rich storytelling in an attempt to innovate and push the boundaries of modern American travel and exploration. Future projects will consist of the “Big Walls and Locals” in the Yosemite Valley. You can follow him on Instagram.