Down in the basement, I laid on my make-shift bed on the floor, as I didn’t yet own a mattress. My room had no windows, creating an atmosphere similar to a cool, dark cave. I shut my eyes to find solitude from the small sliver of golden light fighting its way in from under the door. What was once visual faded as my world morphed into thought. Thoughts of me, as a body, preceded all else, and it needed the proper arrangement of pillows and blanket to allow for its preferred comfort. Only my left foot protruded from under the cover to prevent from overheating, while still clothed in a sock of cheap cotton and polyester.

Sleep was coming but I was still restless from the monotony of the day. It occurred to me that it was just over a year ago when I last wore socks to bed, and I began to remember the nights out on the California farm; any exposed skin surely stung from the chill. The battered trailer I lived in out there lacked in luxuries, to say the least. It had no heat, refrigeration, or running water – it was just a simple shell with shelves and a bed. Even a mild breeze warped and contorted its exterior, consisting of only white, corrugated fiberglass, and painted with years of sun. You could barely see the green stripes it once had.

Farm life was an exhausting routine of feeding over 200 hogs, 8 cows, 60 goats and sheep, 6 dogs, and a few unforgettable donkeys – the true escape artists, as they would take it upon themselves to destroy a part of their enclosure every day. I was taking a break from climbing, as a death-defying incident left me questioning everything. I heard about a farm and I went for it. Why? I’m not sure – maybe I wanted to experience the true grit of manual labor, or maybe I was simply running away from my life in Boulder, CO. 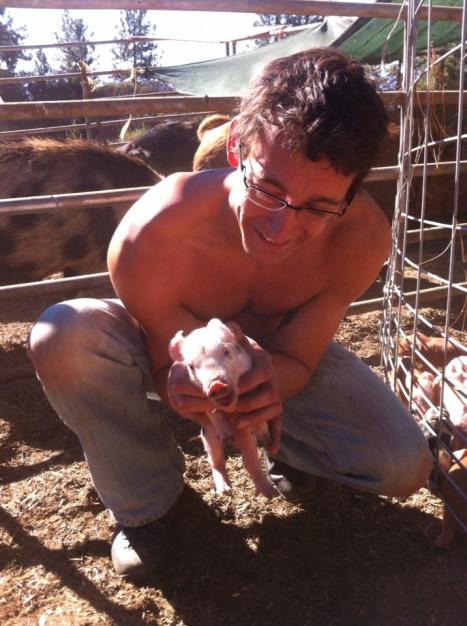 Each California morning, looking to the west, just beyond my front door, one could taste the crisp air and sense the altitude while peering over the clouds. The heat came as the day progressed, and the sun wasted no time in reminding your skin how to burn. I watched every sunrise and sunset – a true gift felt only in the present. At night, with each change in phase, the moon revealed its various moods, and the stars glistened in contrast to the dark sky. Under the light of my headlamp, I’d often drift away into the words of Henry David Thoreau and, with a timeless imagination, I would join him in his quest for understanding. He spoke of the word wild, or the past participle of self-willed, which seemed like such a novel yet simple description. Excitement filled me when I first discovered the trailer’s name, Wilderness, which I of course called home. Was it fate, then, that brought me there?

A realization was driven to the forefront of my mind while I laid there in bed. I questioned why I had such a vivid memory of that place. In fact, what do my most detailed and cherished memories have in common that keep them everlasting? Perhaps a commonality is found in life’s upheavals. A spirit and mind unchallenged falls into a rhythm. Days become grey and indistinguishable from one another. Life seems to escape as time accelerates. But when there is an abrupt change of pace or plan, a new attention must be paid to one’s surroundings. This attentiveness brings us back to the here and now. With heightened vigilance we experience each second as it occurs versus searching for time lost. Even the essentials of life come into question: survival. The flesh seeks a pattern, or a reassurance of resources, pushing, subconsciously, for the continual support of life. Thus, identifying with new change is necessary in order to assimilate with our most recent circumstances, or exposure. Though a consistent, predictable pattern may only bring us blind security, and I think that is what I was really running away from. The farm brought about a whole new outlook on life for me. It even allowed time for me to fall in love with climbing all over again.

As I attempted to quiet my mind for sleep, another question arose: is life worth securing without memory? If not, what path must I follow to ensure I take notice of life’s complexities made from simple building blocks? This led me to contemplate selflessness – moreover, the interconnectedness that selflessness yields. Religions often claim we are made from the dust of the Earth and all connected as one. Ecology attempts to describe our place with webs or networks of relationships where abiotic and biotic coexist. Biology expresses the essence of living things, which are made of cells driven by proteins transcribed from DNA and RNA. Chemistry constructs the non-organic and organic with elements for their building blocks. Astronomy creates these elements from atoms forged out of chaos, in the hearts of stars. Physics finds patterns in this chaos called laws, proving mass is energy, which is neither created nor destroyed. We are but energy in its endless forms, each form not necessarily aware of all or any of the others. Simply combine energy with time, a simultaneous past, future, present, space and those not yet defined, and we find what some call God.

But why do we crave knowledge, experience, and understanding? I say, that it is because despite being a complete piece, we are only a piece of the complete. In order to wrap our heads around this notion and seek to fully understand it, we are confronted again with selflessness – or is it really a matter of self-awareness? I truly believe that if we all strive to be more self-aware, and aware of our relationships to all of these categories of existence as we know it, we wouldn’t be so unsustainably oriented. We would be able to look at each other and laugh at our transience, and enjoy life for what it is, a beautiful expression of consciousness.

And with that final note, sleep took me, for another night, to a world beyond consciousness, where I dreamt of having super-human strength – which would ultimately suck, because climbing would become somewhat pointless. So I sat there, in my dream, with super-human strength, opening jars of pickles for the needy.

One thought on “Memory and The Self”