As per the annual birthday post, here we go…

The year began with a leap into a terrifying dream: to traverse the Wind River Range via the High Route. My training and recovery became a full-time job. Luckily, I won Gear Junkie’s Adventure Grant to actually pay for life and all the gear I’d ever need for the expedition. I never thought it was possible for me to ever be, solely, an athlete. It was an incredible gift and experience to have had.

Overuse injuries were nearly show-stoppers in the first four months of the year. When I won the Grant, I cried to Patrick, not out of joy but out of fear. My shins and my psoas were still giving me problems. The commitment and social pressures to succeed were utterly overwhelming. I didn’t want to turn out to be a fraud, to find that I had misled people’s support by not being transparent about the current state of my body.

But this also drove me to believe whole-heartedly in my strength to heal. I committed to meditating every morning, repeating mantras of health, strength, courage for months. I stretched and rolled out religiously. I became very intentional about my relationship with my body, visualizing the beginning and end to the expedition. And it worked. I healed just in time for July, the most critical training month. I felt strong in both mind and body. Then suddenly, with only a week left, I pulled something in my quad which irritated the knee. Wearing a thin knee brace was the only thing that worked to relieve it. That and pure belief.

Little grasshoppers everywhere, with every step, by the school, through the cemetery. Sacajawea and life…

The Wind River Range was everything we feared and not. I was chanting mantras and asking for safe passage until the moment Emma and I dragged our blistered feet across the finish line. I’d slipped on snow and had to self-arrest, I’d woken up to an animal in the night, I’d spiraled down a rabbit hole of shame and fatigue, feared for my health as I shivered instead of slept, Emma developed a phlegmy cough, I teetered a large boulder near the summit of Downs Mountain, Emma and I had lost each other for two hours…

We’d done something that terrified us, something that only months prior felt impossible, and the success was all the more intoxicating for it. There were many situations that could have ended badly, but we never lost our sensibility for risk. Luck and the will of the land were graciously on our side. Nonetheless, the Wind River Range remains a dangerous place. As does all of life…

12/4/19 – Mojave Rain. Low distended clouds
black lava
dried into clumpy fists
cracked porous
salt soil crusted
hexes latticed white — am I at my best or why is it that I know how to describe the way things can be broken? Shatter beneath atmosphere or me? Why is it that I learned to experience certain things in their manner of destruction? That I must be the one to push a foot into the crust or witness the hissing magma tear, lose myself to the grey fractures of rain?

My 30th year of life was an incredible year. It was filled with intense adventure and poetry, from becoming a full-time athlete to being challenged on the foundations of who I am. I established three fastest known times (FKTs) in my first year of pursuing ultra-running. I received news that my essay in Alpinist 62 (about my 2017 climbing/eclipse experience in the Wind River Range) made the Notable Mentions list in Best American Essays 2019 anthology.

In the big picture, I’m glowing. In the most minute of details, however, I’m feeling all the more unsure about life.

Badger dug with long claws
badger stared with head low
like a shield
lightning striped
in the depth of holes.

Shoulder blades
steep upward spirals
la luna on the mesa rim
stacked prickly
sharp little stars
and fire
melting even the badger’s mouth
mouth of glass
burned round
shouldered like a shield
in the dead of home.

This past October, I had a brief interview with a mixed-indigenous artist. When chatting about ancestry I began to describe how it’s important to me that I become fluent in Spanish, as that was the language of my family before the mid-1900s. He stopped me in my tracks to comment that “Spanish is also a colonizer language.” Obviously, that is the absolute truth, and yet, no one had ever said it so bluntly. I felt so delegitimized to the point of embarrassment. I don’t even know enough about my family tree to determine what regions of pre-1800 Mexico we may have come from, and long before that, what regions of Spain (or pre-Spain even, say, when the Iberian peninsula was an expanse of multi-cultural clans under Muslim rule for nearly 800 years).

It became painfully clear that there isn’t anything about me that should be deemed worthy of the limelight (because I’m “just another lost white woman”). The irony is that the condition of a language or culture being unwanted has always been the plight of human groups throughout history. But I cannot pretend to know the trauma of indigenous identity. I have lived a relatively privileged life. Plus, there I was, standing in the soft sand of the Arizona desert on the western edge of the Colorado Plateau of my own power and volition. 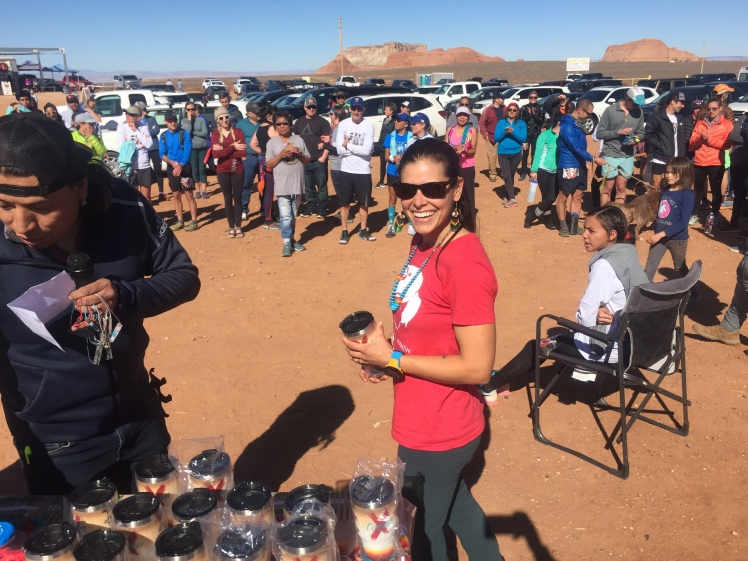 I had come to run a half marathon hosted by the Navajo Nation and had finished First Female. After that conversation, I wanted to shrivel up and die. I had been feeling the triviality of my voice for some time now, but this seemed to finalize the need for silence on my part. My story is not unique and yet I’m not a very good journalist either. How do I justly and dutifully tell the stories of others when I’m passionate about writing my experiences in nature? Is it selfish to write about what I know? I dream of winning a Pulitzer, but I have no idea how I would even try…and I’m so behind on reading…

What could possibly come from me that would ever be Pulitzer worthy? Why should I dream of this when there are voices more important than mine?

The older I get, the less I want anything to do with the internet. Blog writing, at least for me, has either become a scary thing or a chore. The biggest obstacle this year has truly been this: that I’ve lost a lot of faith in my own words, particularly, their relevance. What a contrast, isn’t it? To win such an honor for an essay and then to turn around and feel empty. But that is the vibrancy of life: to feel it one moment and not the next. The void is what (hopefully) compels us to move forward. 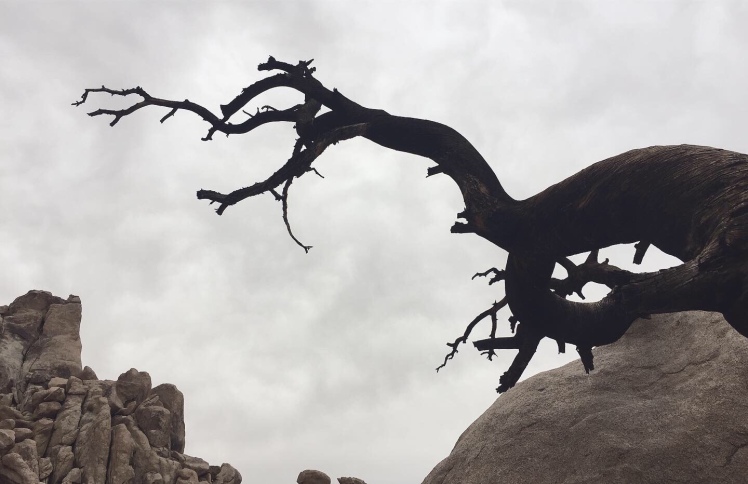 Miscommunication led Patrick to remove his belay device when I wasn’t ready one day at Shelf Road. I was hanging onto the anchor draws with my hands when I heard the familiar clicks of the gri-gri, which caused me to look down before sitting onto the rope. I was surprised by how calm I was. When I was safely back on the ground, he held me, nearly in tears. It was a good reminder that, no matter how long you’ve been in the game, something can always go wrong. I celebrated 10 years of climbing this year and it all boiled down to that one moment, where the metallic sounds quickly filtered through my brain as a message of warning.

12/1/19 – A few days ago I went on a run around the neighborhood in Gainesville, Florida…the day we discovered that Brad [Gobright] had died. Near the end of the run I passed a green leaf on the sidewalk and my eye caught the sight/shape of a miniature wasp nest. It couldn’t have been much bigger than my thumb. And it seemed to be floating there, above the leaf. To imagine the series of events in the life and saga of those who built it, and of how the leaf had even come to fall…what years and natural circumstances had to have taken place, even on my end, for this moment? It was a very quick encounter, and certainly a very trivial one [in comparison to Brad], but it was pleasant to witness. But the story of the nest isn’t, of course, over.

The older I get, the more a sense of urgency builds up in me. An urgency for worth. An urgency to savor time. Sure, I can “write pretty” but what are my words actually doing for the world? From what I can infer, the answer is a blunt nothing. (Insert plea that a writer’s worth is not derived from whether or not they have the ability to change/add to the value of/innovate for the world.) But it’s hard to ignore the sensation that all I contribute to is the saturation and the redundancy of writing.

12/8/19 – He can cry to me in a way that the desert can’t. When he buries his head like he wishes to do with his heart, whispering, “I miss them so much,” the yucca and the cacti stretch sunward, silent. If you are to walk into the desert far enough, a jackrabbit will dart from a bush or a pile of decomposing Joshua Trees. The jackrabbit, with its black-tipped ears and large back feet, will run like an arrow of freedom. There are yellow grasses, like tufts of combed dog hair. The soil, from above, looks like the beady granite (in future form)…

Who am I to stop the world from turning? From taking away what we grow to love?

Every year we mourn someone or something new. It’s difficult to not wrap myself up entirely in the sadness of life and see it everywhere. I’m still reading Braiding Sweetgrass by Robin Wall Kimmerer (highly recommended). But a recent passage also has me thinking too much about writing. She states:

“Responsibility to the tree makes everyone pause before beginning. Sometimes I have that same sense when I face a blank sheet of paper. For me, writing is an act of reciprocity with the world; it is what I can give back in return for everything that has been given to me. And now there’s another layer of responsibility, writing on a thin sheet of tree and hoping the words are worth it. Such a thought could make a person set down her pen.”

And I do thusly so…I close this 30th chapter. May 2020 prove to be a year of resilience, for the dreams that scare me are actually the ones that motivate me the most. Whether it be running, climbing, writing, I seem to always tread on. The words still find me. Ever richer, ever vibrant, even in the depths of holes the jackrabbit runs.